Uganda, country in east-central Africa. About the size of Great Britain, Uganda is populated by dozens of ethnic groups. The English language and Christianity help unite these diverse peoples, who come together in the cosmopolitan capital of Kampala, a verdant city whose plan includes dozens of small parks and public gardens and a scenic promenade along the shore of Lake Victoria, Africa’s largest freshwater lake. The Swahili language unites the country with its East African neighbours Kenya and Tanzania.

“Uganda is a fairy-tale. You climb up a railway instead of a beanstalk, and at the end there is a wonderful new world,” wrote Sir Winston Churchill, who visited the country during its years under British rule and who called it “the pearl of Africa.” Indeed, Uganda embraces many ecosystems, from the tall volcanic mountains of the eastern and western frontiers to the densely forested swamps of the Albert Nile River and the rainforests of the country’s central plateau. The land is richly fertile, and Ugandan coffee has become both a mainstay of the agricultural economy and a favourite of connoisseurs around the world.

Uganda takes its name from the Buganda kingdom, which encompasses a large portion of the south of the country, including the capital Kampala. The people of Uganda were hunter gatherers until 1,700 to 2,300 years ago, when Bantu-speaking populations migrated to the southern parts of the country.

Beginning in 1894, the area was ruled as a protectorate by the UK, who established administrative law across the territory. Uganda gained independence from the UK on 9 October 1962. The period since then has been marked by violent conflicts, including an 8-year-long far right military dictatorship led by officer Idi Amin. Additionally, a lengthy civil war against the Lord’s Resistance Army in the Northern Region led by Joseph Kony, has caused hundreds of thousands of casualties.

The official languages are English and Swahili, although “any other language may be used as a medium of instruction in schools or other educational institutions or for legislative, administrative or judicial purposes as may be prescribed by law.” Luganda, a central language, is widely spoken across the country, and several other languages are also spoken including Runyoro,Runyankole, Rukiga, Luo and Lusoga.

The current president of Uganda is Yoweri Kaguta Museveni, who came to power in January 1986 after a protracted six-year guerrilla war. He has since eliminated the presidential term limits and the presidential age limit; due to the nature of Ugandan politics, this effectively makes him president for life.

Main articles: Economy of Uganda, Energy in Uganda, and Agriculture in Uganda 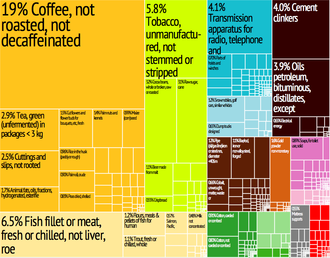 The Bank of Uganda is the central bank of Uganda and handles monetary policy along with the printing of the Ugandan shilling.[99]

The country has largely untapped reserves of both crude oil and natural gas.[102] While agriculture accounted for 56 percent of the economy in 1986, with coffee as its main export, it has now been surpassed by the services sector, which accounted for 52 percent of GDP in 2007.[103] In the 1950s, the British colonial regime encouraged some 500,000 subsistence farmers to join co-operatives.[104] Since 1986, the government (with the support of foreign countries and international agencies) has acted to rehabilitate an economy devastated during the regime of Idi Amin and the subsequent civil war.[3]

Economic growth has not always led to poverty reduction. Despite an average annual growth of 2.5 percent between 2000 and 2003, poverty levels increased by 3.8 percent during that time.[106] This has highlighted the importance of avoiding jobless growth and is part of the rising awareness in development circles of the need for equitable growth not just in Uganda, but across the developing world.[106]

Uganda traditionally depends on Kenya for access to the Indian Ocean port of Mombasa. Efforts have intensified to establish a second access route to the sea via the lakeside ports of Bukasa in Uganda and Musoma in Tanzania, connected by railway to Arusha in the Tanzanian interior and to the port of Tanga on the Indian Ocean.

Uganda has a large diaspora, residing mainly in the United States and the United Kingdom. This diaspora has contributed enormously to Uganda’s economic growth through remittances and other investments (especially property). According to the World Bank, Uganda received in 2016 an estimated US$1.099 billion in remittances from abroad, second only to Kenya (US$1.574 billion) in the East African Community.[111] Uganda also serves as an economic hub for a number of neighbouring countries like the Democratic Republic of the Congo,[112] South Sudan,[113] and Rwanda.[114]

People in rural areas of Uganda depend on farming as the main source of income and 90 per cent of all rural women work in the agricultural sector.[122] In addition to agricultural work, rural women are responsible for the caretaking of their families. The average Ugandan woman spends 9 hours a day on domestic tasks, such as preparing food and clothing, fetching water and firewood, and caring for the elderly, the sick as well as orphans. As such, women on average work longer hours than men, between 12 and 18 hours per day, with a mean of 15 hours, as compared to men, who work between 8 and 10 hours a day.[123]

To supplement their income, rural women may engage in small-scale entrepreneurial activities such as rearing and selling local breeds of animals. Nonetheless, because of their heavy workload, they have little time for these income-generating activities. The poor cannot support their children at school and in most cases, girls drop out of school to help out in domestic work or to get married. Other girls engage in sex work. As a result, young women tend to have older and more sexually experienced partners and this puts women at a disproportionate risk of getting affected by HIV, accounting for about 57 per cent of all adults living with HIV in Uganda.[124]

Maternal health in rural Uganda lags behind national policy targets and theMillennium Development Goals, with geographical inaccessibility, lack of transport and financial burdens identified as key demand-side constraints to accessing maternal health services;[125] as such, interventions like intermediate transport mechanisms have been adopted as a means to improve women’s access to maternal health care services in rural regions of the country.[126]

Gender inequality is the main hindrance to reducing women’s poverty. Women are subjected to an overall lower social status than men. For many women, this reduces their power to act independently, participate in community life, become educated and escape reliance upon abusive men.[127]

The rail network in Uganda has a length of estimated 783 miles. The longest lines are the main line from Kampala to Tororo (155 mi), the western line fromKampala to Kasese (207 mi), the northern line from Tororo to Pakwach(398 mi).[134]

An advertisement for a mobile phone carrier on a van in Kampala.

There are seven telecommunications companies serving over 21 million subscribers[135] in a population of over 34 million.[136] More than 95 percent of internet connections are made using mobile phones.[137]

The total mobile and fixed telephony subscriptions increased from over 20 million to over 21 million yielding an increment of over 1.1 million subscribers (5.4 increase) compared to the 4.1 percent increases realized in the previous quarter Q4 2014 (October–December).[135]

According to a 2006 published report, the Ugandan water supply and sanitation sector had made substantial progress in urban areas since the mid-1990s, with substantial increases in coverage as well as in operational and commercial performance.[139]:3–4 Sector reforms in the period 1998–2003 included the commercialization and modernization of the National Water and Sewerage Corporation operating in cities and larger towns, as well as decentralization and private sector participation in small towns.[140]:15

Although these reforms have attracted significant international attention, 38 percent of the population still had no access to an improved water source in 2010. Concerning access to improved sanitation, figures have varied widely. According to government figures, it was 70 percent in rural areas and 81 percent in urban areas in 2011,[141] while according to UN figures it was only 34 percent.[142]

The water and sanitation sector was recognized as a key area under the 2004 Poverty Eradication Action Plan (PEAP), Uganda’s main strategy paper to fight poverty.[143]:182–188 According to a 2006 published report, a comprehensive expenditure framework had been introduced to coordinate financial support by external donors, the national government, and nongovernmental organizations.[144]:5 The PEAP estimated that from 2001 to 2015, about US$1.4 billion, or US$92 million per year, was needed to increase water supply coverage up to 95 percent, with rural areas needing US$956 million, urban areas and large towns needing US$281 million, and small towns needing US$136 million.[143]:182–183

Main articles: Health in Uganda and HIV/AIDS in Uganda

Health system. There were eight physicians per 100,000 persons in the early 2000s.[145] Uganda’s elimination of user fees at state health facilities in 2001 has resulted in an 80 percent increase in visits, with over half of this increase coming from the poorest 20 percent of the population.[146] This policy has been cited as a key factor in helping Uganda achieve its Millennium Development Goals and as an example of the importance of equity in achieving those goals.[106] Despite this policy, many users are denied care if they do not provide their own medical equipment, as happened in the highly publicised case of Jennifer Anguko.[147] Poor communication within hospitals,[148] low satisfaction with health services[149] and distance to health service providers undermine the provision of quality health care to people living in Uganda, and particularly for those in poor and elderly-headed households.[150] The provision of subsidies for poor and rural populations, along with the extension of public private partnerships, have been identified as important provisions to enable vulnerable populations to access health services.[150]

Infectious disease. In July 2012, there was an Ebola outbreak in the Kibaale District of the country.[153] On 4 October 2012, the Ministry of Health officially declared the end of the outbreak after at least 16 people had died.[154]

The Health Ministry announced on 16 August 2013 that three people had died in northern Uganda from a suspected outbreak of Congo Crimean Hemorrhagic Fever.[155]

Reproductive health. Less than half of all sexually active unmarried women use a modern contraceptive method, a fraction that as barely changed from 2000 to 2011. However, only ~26% of married women used contraceptives in 2011. The use of contraceptives also differs substantially between poor (~15%) and wealthy women (~40%).[159] As a result, Ugandan women have ~6 children while they prefer to have around ~4. According to the 2011 Uganda Demographic and Health Survey (DHS), more than 40% of births are unplanned. In 2010, the Ugandan Ministry of Health estimated that unsafe abortion accounted for 8% of the country’s maternal deaths.[159] The 2006 Uganda Demographic Health Survey (UDHS) indicated that roughly 6,000 women die each year from pregnancy-related complications.[160] However, recent[when?]pilot studies by Future Health Systems have shown that this rate could be significantly reduced by implementing a voucher scheme for health services and transport to clinics.[161][162]

The prevalence of female genital mutilation (FGM) is low: according to a 2013 UNICEF report,[163] Only 1 percent of women in Uganda have undergone FGM, with the practice being illegal in the country.[164]

1 reply on “Tapestry Landscapes of Uganda”