Ivory Coast’s political capital is Yamoussoukro in the centre of the country, while its economic capital and largest city is the port city of Abidjan. It borders Guinea and Liberia to the west, Burkina Faso and Mali to the north, Ghana to the east, and the Gulf of Guinea (Atlantic Ocean) to the south.

Before its colonization by Europeans, Ivory Coast was home to several states, including Gyaaman, the Kong Empire, and Baoulé. The area became a protectorate of France in 1843 and was consolidated as a French colony in 1893 amid the European scramble for Africa. It achieved independence in 1960, led by Félix Houphouët-Boigny, who ruled the country until 1993. Relatively stable by regional standards, Ivory Coast established close political and economic ties with its West African neighbors while at the same time maintaining close relations to the West, especially France. Ivory Coast experienced a coup d’état in 1999 and two religiously-grounded civil wars, first between 2002 and 2007 and again during 2010–2011. In 2000, the country adopted a new constitution.

Ivory Coast is a republic with strong executive power vested in its president. Through the production of coffee and cocoa, the country was an economic powerhouse in West Africa during the 1960s and 1970s, though it went through an economic crisis in the 1980s, contributing to a period of political and social turmoil. It was not until around 2014 that the gross domestic productagain reached the level of its peak in the 1970s. In the 21st century, the Ivorian economy has been largely market-based, and it still relies heavily on agriculture, with smallholder cash-crop production being predominant.

The official language of the republic is French, with local indigenous languages also being widely used that include Baoulé, Dioula, Dan, Anyin, and Cebaara Senufo. In total, there are around 78 different languages spoken in Ivory Coast. The country has large populations of Muslims, Christians (primarily Roman Catholics), and various indigenous religions.

For more than three decades after its independence from France, Ivory Coast was known for its religious and ethnic harmony, as well as its well-developed economy.

The Western African country was hailed as a model of stability. But an armed rebellion in 2002 split the nation in two. Since then, peace deals alternated with renewed violence as the country slowly edged its way towards a political resolution of the conflict.

Despite the instability, Ivory Coast is the world’s largest exporter of cocoa beans, and its citizens enjoy a relatively high level of income compared to other countries in the region.

The Republic of Ivory Coast

Alassane Ouattara has been in power since his predecessor, Laurent Gbagbo, was forcibly removed from office after refusing to accept Mr Ouattara’s internationally recognised victory in the November 2010 presidential election.

In 2015, Mr Ouattara won a second five-year term with nearly 84% of the vote, in an election described as credible by US observers.

A US-educated economist from the Muslim north, Mr Ouattara served as President Felix Houphouet-Boigny’s last prime minister after a long career at the International Monetary Fund.

The government operates the outlets with the widest reach, including TV and radio networks and the main daily newspaper.

There are no privately-owned terrestrial TV stations.

The media are kept under close government scrutiny, says Reporters Without Borders.

Some key dates in the history of Ivory Coast:

A chronology of key events

1944 – Felix Houphouet-Boigny, who later to become Ivory Coast’s first president, founds a union of African farmers, which develops into the inter-territorial African Democratic Rally and its Ivorian section, the Ivory Coast Democratic Party.

1958 – Ivory Coast becomes a republic within the French Community.

1960 – France grants independence under President Felix Houphouet-Boigny. He holds power until he dies in 1993.

1995 October – Mr Bedie is re-elected in a ballot that is boycotted by opposition parties in protest at restrictions imposed on their candidates.

1999 July – Alassane Ouattara, a Muslim, leaves job at International Monetary Fund and returns to run for president in 2000; his plan to challenge Bedie splits country along ethnic and religious lines.

2000 October – General Guei proclaims himself president after announcing he has won presidential elections, but is forced to flee in the wake of a popular uprising and is replaced by his challenger Laurent Gbagbo.

Fighting erupts between President Gbagbo’s mainly southern Christian supporters and followers of his main opponent Alessandre Ouattara, who are mostly Muslims from the north.

2001 March – President Gbagbo and Mr Ouattara meet and agree to work towards reconciliation.

2002 September – Mutiny in Abidjan by soldiers unhappy at being demobilised grows into full-scale rebellion, with Ivory Coast Patriotic Movement rebels seizing control of the north.

2005 April – After talks in South Africa the government and rebels declare an “immediate and final end” to hostilities.

2005 October – Planned elections are shelved as President Gbagbo invokes a law which he says allows him to stay in power. The UN extends his mandate for a further year.

2006 September – Government resigns over a scandal involving the dumping of toxic waste in Abidjan. Fumes from the waste kill three people and make many more ill.

2007 December – Rebel, government soldiers pull back from front-line positions as part of process to reunite country.

2009 May – Former rebels hand over 10 northern zones to civilian administrators, as part of the process of returning the northern part of the country to state control.

2011 April – Alassane Ouattara’s forces capture Laurent Gbagbo, who is handed over to the International Criminal Court in The Hague in November to face charges of crimes against humanity.

2011 September – Truth, Reconciliation and Dialogue Commission – aimed at forging unity after post-election violence that left about 3,000 people dead and 500,000 displaced – is launched.

2016 March – Al-Qaeda jihadists attack the beach resort of Grand Bassam, near Abidjan, killing 18 people. The attack follows similar assaults on hotels in the capitals of Mali and Burkina Faso in recent months.

2017 January-May – Sporadic mutinies by soldiers over non-payment of bonuses.

2018 August – Former first lady Simone Gbagbo is amnestied in what President Ouattara says is a move to foster reconciliation.

According to 2012 government survey, the fertility rate was 5.0 children born per woman, with 3.7 in urban areas and 6.3 in rural areas.

French, the official language, is taught in schools and serves as a lingua franca in the country. An estimated 70 languages are spoken in Ivory Coast. One of the most common is Dyula, which acts as a trade language, as well as a language commonly spoken by the Muslim population.

Around 7.5 million people of Ivory Coast made up the work force in 2009. The work force took a hit, especially in the private sector, during the early 2000s due to the numerous economic crises since 1999. Furthermore, these crises caused companies to close and move locations, especially in Ivory Coast’s tourism industry, transit and banking companies. Job markets decreasing posed as a huge issue in Ivory Coast society as unemployment rates grew. Unemployment rates raised to 9.4% in 2012.

Solutions proposed to decrease unemployment included diversifying jobs in small trade. This division of work encouraged farmers and the agricultural sector. Self-employment policy, established by the Ivorian government, allowed for very strong growth in the field with an increase of 142% in seven years from 1995. Despite efforts like this to decrease unemployment, it still remains as a social problem.

Since Ivory Coast has established itself as one of the most successful West African nations, about 20% of the population (about 3.4 million) consists of workers from neighbouring Liberia, Burkina Faso, and Guinea.

About 4% of the population is of non-African ancestry. Many are French, Lebanese,Vietnamese and Spanish citizens, as well as Protestant missionaries from the United States and Canada. In November 2004, around 10,000 French and other foreign nationals evacuated Ivory Coast due to attacks from pro-government youth militias. Aside from French nationals, native-born descendants of French settlers who arrived during the country’s colonial period are present. 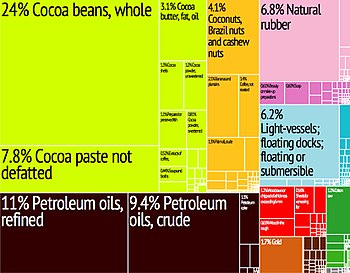 A proportional representation of Ivory Coast’s exports in 2011

Ivory Coast has, for the region, a relatively high income per capita(US$1,662 in 2017) and plays a key role in transit trade for neighboring, landlocked countries. The country is the largest economy in the West African Economic and Monetary Union, constituting 40% of the monetary union’s total GDP. The country is the world’s largest exporter of cocoa beans, and the fourth-largest exporter of goods, in general, in sub-Saharan Africa (following South Africa, Nigeria, and Angola).

In 2009, cocoa-bean farmers earned $2.53 billion for cocoa exports and were projected to produce 630,000 metric tons in 2013. According to the Hershey Company, the price of cocoa beans is expected to rise dramatically in upcoming years.[80] The Ivory Coast also has 100,000 rubber farmers who earned a total of $105 million in 2012.

Close ties to France since independence in 1960, diversification of agricultural exports, and encouragement of foreign investment have been factors in the economic growth of Ivory Coast. In recent years, Ivory Coast has been subject to greater competition and falling prices in the global marketplace for its primary agricultural crops: coffee and cocoa. That, compounded with high internal corruption, makes life difficult for the grower, those exporting into foreign markets, and the labor force, inasmuch as instances of indentured labor have been reported in the country’s cocoa and coffee production in every edition of the U.S. Department of Labor‘s List of Goods Produced by Child Labor or Forced Labor since 2009.

The Ivory Coast’s economy has grown faster than that of most other African countries since independence. One possible reason for this might be taxes on export agriculture. Ivory Coast, Nigeria, and Kenya were exceptions as their rulers were themselves large cash-crop producers, and the newly independent countries desisted from imposing penal rates of taxation on export agriculture, with the result that their economies were doing well. 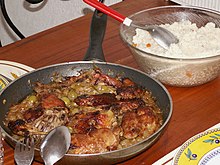 Yassa is a popular dish throughout West Africa prepared with chicken or fish. Chicken yassa is pictured.

The traditional cuisine of Ivory Coast is very similar to that of neighboring countries in West Africa in its reliance on grains and tubers. Cassava and plantains are significant parts of Ivorian cuisine. A type of corn paste called aitiuis used to prepare corn balls, and peanuts are widely used in many dishes. Attiéké is a popular side dish in Ivory Coast made with grated cassava, a vegetable-based couscous. A common street food is alloco, ripe banana fried in palm oil, spiced with steamed onions and chili and eaten alone, with grilled fish or boiled eggs. Chicken is commonly consumed and has a unique flavor due to its lean, low-fat mass in this region. Seafood includes tuna, sardines, shrimp, and bonito, which is similar to tuna. Mafé is a common dish consisting of meat in a peanut sauce.

Slow-simmered stews with various ingredients are another common food staple in Ivory Coast. Kedjenou is a dish consisting of chicken and vegetables slow-cooked in a sealed pot with little or no added liquid, which concentrates the flavors of the chicken and vegetables and tenderizes the chicken. It is usually cooked in a pottery jar called a canary, over a slow fire, or cooked in an oven.

Ivorians have a particular kind of small, open-air restaurant called a maquis, which is unique to the region. A maquisnormally features braised chicken and fish covered in onions and tomatoes, served with attiéké or kedjenou.